I haven't posted in eons, and for that I am sorry. There have been... ahem... some developments that have made it difficult for me to post without touching on them. Namely, I found out I am going to be a mother this winter.

I'm in my second trimester, and slowly getting comfy with telling people... but there is still some anxiety around it. Not because I'm unhappy with the news, but because it feels so intensely personal that it feels like I am exposing myself every time I tell. Like they say in Tina Fey's movie Baby Mama - I'm coming out of the mommy closet... revealing that this is something that I have not only longed for for years but that it's something I feel will intensely affect and change the course of my life. This is something I know.

And I've been waiting.

In a way, this baby is much like the herald of a new era for me - an era filled with an abundance of creativity, and fresh thinking. A spring for what seems like my longest winter.

But therein also lies the anxiety.

As much as I know that this child will force me to re-examine my creative backburner that has too long gone unattended, it's almost painful to go back to failed attempts at writing, at creating - and open that passage again. What if? What if? What if it all goes bad again? Can I handle the rejection? AM I GOOD ENOUGH? Most of you are probably nodding your heads. You've been there. Who hasn't.

This tiny thing inside of me is already rifling through all the garbage I've been burying and is starting to bring it up (along with yesterday's dinner). So the stall in writing has mostly been me steadying myself against anything solid - hoping I'll make it through this windstorm of change.
Posted by Diana at Monday, September 08, 2008 4 comments:

Clearing out the Cobwebs

A good friend recently wrote me about a dream she had had that was of particular concern to her. She dreamt that her apartment was filthy, disgusting - and in a complete state of disorder. Things were rotting in corners and she had an infestation of spiders - hatching spider eggs on the kitchen counter. And a cockroach - the ultimate sign of filth.

We both agreed that this was likely a message from her subconscious letting her know that she needed to do a little spring cleaning of her thoughts and notions about how the world works.

Because in dream time any housing represents your mind and in turn, your thoughts, your mental processes (I wouldn't go so far as to say emotions, because there wasn't the presence of water). So clearly, there were a few "rotting" ideas in her head, some stale energy and a lot of garbage that she needed to get rid of.

We also explored what her "spiders" were. What were the "pests" in her head - perhaps ongoing or constantly "hatching" negative thoughts or ideas? Through discussion, my friend realized that it was likely caused by the emergence of a new relationship and how it wasn't exactly what she thought it would be like.. that these thought pests might be her old expectations or notions infesting her current acceptance of reality.

But what I found most interesting was the notion of needing a "spring cleaning" of the brain. Once a year, or maybe more if you're really good, you go through your junk or your garage or your living space and you clean out the old - either donate old clothes or recycle that huge pile of newspapers from the last year. But how often do we do the same with regard to our thought patterns?

How often do we sit with ourselves and say - what's old? what's not working anymore?

This is maybe something worth doing twice a year... because god knows we all gather a lot of thought "junk" every day - notions about what we should look like, how much we should earn, what our perfect man/woman looks like, acts like, etc. And sometimes these things sit inside for so long that they end up rotting, cluttering our brain and ultimately infesting our reality.

If you have not yet seen this extraordinary talk about her stroke of insight, you might want to take a peek. I was completely mesmerized by her story. She was a brain scientist who suffered a massive stroke that shut down the whole of her left hemisphere and left her completely right-brained.

And it turns out that it was bliss. You must watch.

In the Harry Potter books (and movies) there are creatures called Dementors - creatures that feed on misery and live by sucking the happiness out of everyone (see clip above). It's a perfect representation of those people you meet in the everyday who just seem hell-bent to bring you off your high and into their low. Why? Because misery loves company?

Unlike the dementors in Harry Potter, though, chocolate alone won't make the chills go away after an encounter with these emotional vampires.. it requires a little more than that. Literally, you need to work on building up your psychic self-defense. A tight bubble of positive energy around yourself that can't be touched, drained or perforated by their attempts to bog you down.

I certainly have my fair share of personal dementors. Any other good tips on dealing with these creatures in your office or in your circle of friends?
Posted by Diana at Thursday, June 26, 2008 1 comment:

I forget sometimes how powerful and important the tarot can be in helping me take a good hard look at my life. This past weekend I had this really big question on my brain (not related to work) and I asked it, doing a full Celtic cross reading on it. The results were baffling... they made no sense!

...Until I realized that it had completely ignored my question and had gone straight ahead onto critiquing my work situation.

Sometimes I hate the tarot because it has that funny way of telling you what you really need to hear, rather than what you actually want to know. So I got a big fat kick in the ass, lots of hard love and a solid amount of chiding before I realized it was SO right. And I was forced to see what I had been turning a blind eye to for months.

It was only after I had properly digested this information that I decided not to let the tarot off the hook completely. I asked my original question and pulled a single card for an answer.

In the meantime, still getting weepy daily over my immense gratitude for the state of my life right now. Am completely in the flow of wonderfulness and loving and living and laughing. Ha!

Sure, there are still bumps in the road - aren't there always? - but they don't matter as much. I can't help but feel lucky. Every day. Have never really felt like this for so long before... a couple days here or there, but this has been months of gratitude. And happiness.

Am also trying very much to get in the present. The future is going to come, I no longer worry about it so much. Instead, I'm trying to just BE - and see where it gets me.

How are things with you?

Blogged with the Flock Browser
Posted by Diana at Tuesday, June 10, 2008 1 comment:

I have a slew of strange little beliefs with seemingly little or no origin. Did I read it somewhere, did I piece it together or did I make it up? I can't be sure.

One of these beliefs involves the true nature of the phenomenon known as deja vu, translating literally to "seen before".

"We have all some experience of a feeling, that comes over us occasionally, of what we are saying and doing having been said and done before, in a remote time – of our having been surrounded, dim ages ago, by the same faces, objects, and circumstances – of our knowing perfectly what will be said next, as if we suddenly remember it!"

The scientific cats in their scientific coats explain deja vu as "an anomaly of memory" - it's your brain playing tricks on you, didn't you know?

But what kind of new age quack would I be if I didn't have an alternate theory? 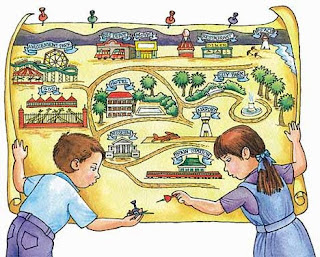 Before we're born, we make a little road map of where we'd like to get to. We mark off the rest stops, the main attractions and we make notes about the people who we'll meet up with at various stops and we highlight the twists and turns. Only, because life on the other side is much more advanced than life here we don't have to write it all down, instead we can see it. I don't know if we see it in our minds' eye or if there's some kind of universal jumbotron - but we 'see' the journey we're about to make, before we make it.

It's like Tiger Woods 'seeing' his swing through before he steps up to the tee.

Okay, so we're all visualized and ready to go. We're born. And not everything will happen the way we 'saw it' - some of us might downright veer off, maybe take the wrong highway. But most of us just take little detours from the main path, I imagine.

Okay so back to "deja vu" - are you starting to see where I'm taking you with this theory? I imagine a "deja vu" to be exactly that - it's a moment in time you've already seen before, back when you were visualizing your road trip. Your memory isn't playing tricks on you - it's remembering something from a time before you were born into who you are now.

So whenever I catch myself in a deja vu moment, I take note of who I'm with, what's happening in my life at the moment and I relax knowing that whatever it is that I'm doing, I'm on the right track. Even if it's an insignificant pit stop. I'm where I need to be.

It's possible that it's a ridiculous theory - but it rings true for me. And might for you. See what you think next time you have a deja vu.
Posted by Diana at Wednesday, June 04, 2008 No comments: